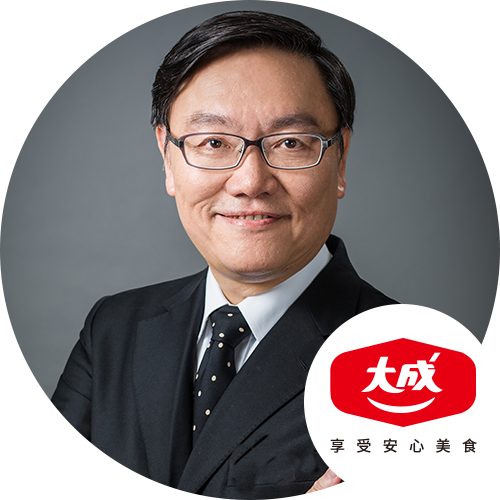 According to the McKinsey report, 110 Chinese companies are on the Fortune 500 list, a number very close to that of the United States. But these companies gain revenue mainly from the Chinese market, with overseas revenue accounting for only 18%, compared to the S&P 500's average of 44%. With the signing of the RCEP, the gradual implementation of the ChinaEU Investment Agreement, and favorable cross-border e-commerce policies, Chinese companies will have more opportunities in overseas markets.

Mr. James Chun-hsien Wei, aged 63, is now the chairman of Dachan Food Asia Limited. Mr. Wei has served as the chief executive officer of Tingyi Holding from 2015 to 2020 and the chief executive officer of the food business of Tingyi Food from 2013 to 2014. Prior to joining Tingyi Holding, Mr. Wei was a senior advisor of CVC Capital Asia Pacific. From 2009 to 2011, he was the executive director and the president of the Asian region of Beiersdorf Aktiengesellschaft Group. From 2003 to 2009, he served as the senior vice president of the Asia Pacific region of Avon Products Inc., where he was responsible for the operations in 10 markets, including Japan, Taiwan, Australia, the Philippines, and India. Before that, Mr. Wei spent 19 years at Procter & Gamble where he was promoted to become the vice president and general manager of the Greater China region, overseeing the company’s health and beauty care business in that region.

Mr. Wei holds a bachelor’s degree in Electrical Engineering from National Taiwan University and a master’s degree in Business Administration from the University of Chicago Booth School of Business in the United States.